Favorites Have a Variety of Colors and Causes

If the 2019/20 USHL season was moving forward according to plan, the Waterloo Black Hawks would be preparing to take the ice this weekend in green and gold jerseys commemorating the 50th anniversary of the Iowa Stars.

Back in the winter of 1969/70, the Black Hawks stepped aside for one season to let the Iowa Stars move into McElroy Auditorium.  The Iowa Stars were the top farm club of the Minnesota North Stars and played in the Central Hockey League against teams from Texas and Oklahoma, as well as opponents from Kansas City and Omaha.  Even though the Stars were in close proximity to their parent club, travel expenses from being on the geographic fringe of the CHL cost the organization far more than could ever be covered by ticket sales.  Minnesota moved their minor league team during the summer of 1970, but that winter had given Waterloo a close encounter with an array of hockey talent; among the players on the Iowa roster, nearly all went on to play in either the NHL or the rival World Hockey Association in the years which followed.

The Stars’ 69/70 jerseys were patterned closely after Minnesota’s design.  The significant difference was replacing the North Stars’ “N-Arrow” with “I-O-W-A” diagonally across the chest.  Otherwise, the color scheme, pattern, and trim were identical.

The Black Hawks recreated the Iowa Stars jerseys for this weekend’s scheduled games against the Cedar Rapids RoughRiders and the Dubuque Fighting Saints.  The sweaters were to be auctioned on Saturday night to benefit Iowa Heartland Habitat for Humanity.

The team is currently making arrangements to bring back these historical jerseys at some point in 2020/21, with additional details to be announced sometime this summer.  In lieu of presenting this weekend’s jerseys for fans at Young Arena, the Black Hawks offer a retrospective top-10 look at some of the leading specialty jerseys the team has worn so far in the 21st century. 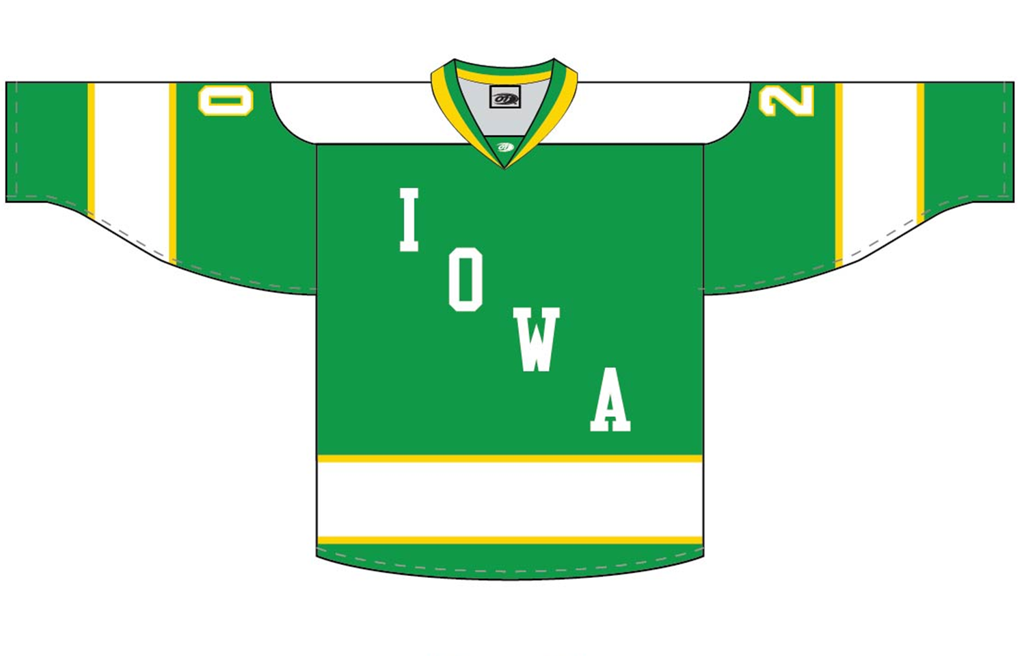 You might not recognize these as special jerseys, but keep in mind that back in 2004/05, the Hawks were featuring a couple of different logos.  It had been approximately a decade since the organization had last taken the ice in Waterloo’s original emblem.  In the meantime, the modified insignia of the 1960s had become associated with the Jr. Hawks, making this a perfect tie-in for the fundraising jersey auction.  Look at it this way, the jerseys must have been good since the team has gone back to something similar for most of the last decade. 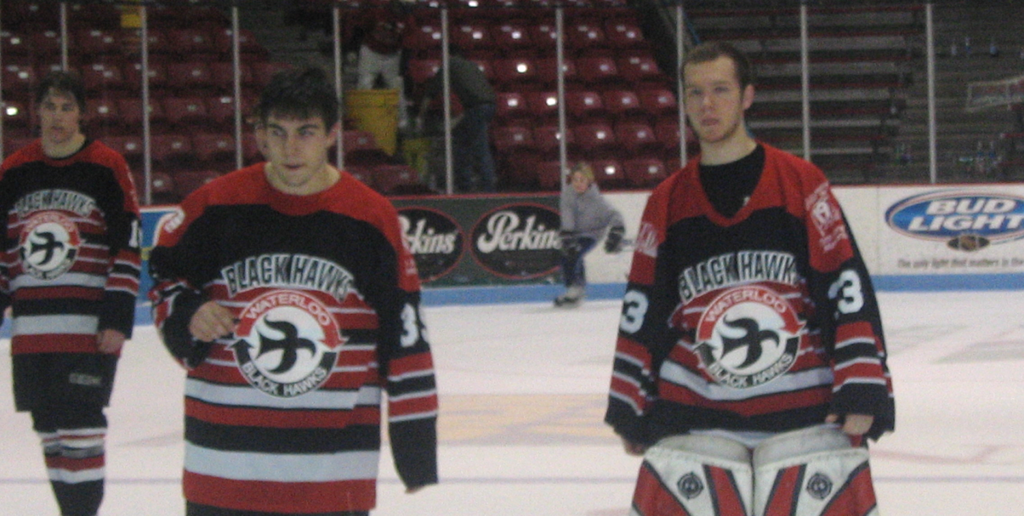 The 2011/12 season presented an opportunity to celebrate 50 continuous years of hockey in Waterloo.  Throughout that winter, a special 50th anniversary logo appeared in team publications, on the Black Hawks’ game pucks, and even in the ice at Young Arena.  The Hawks wore jerseys featuring the logo surrounded by a tribal pattern during a game against their longest continuous rivals, the Sioux City Musketeers.  Taylor Cammarata’s #91 jersey from that night is particularly special; Cammarata recorded a hat trick in Waterloo’s 6-3 win. 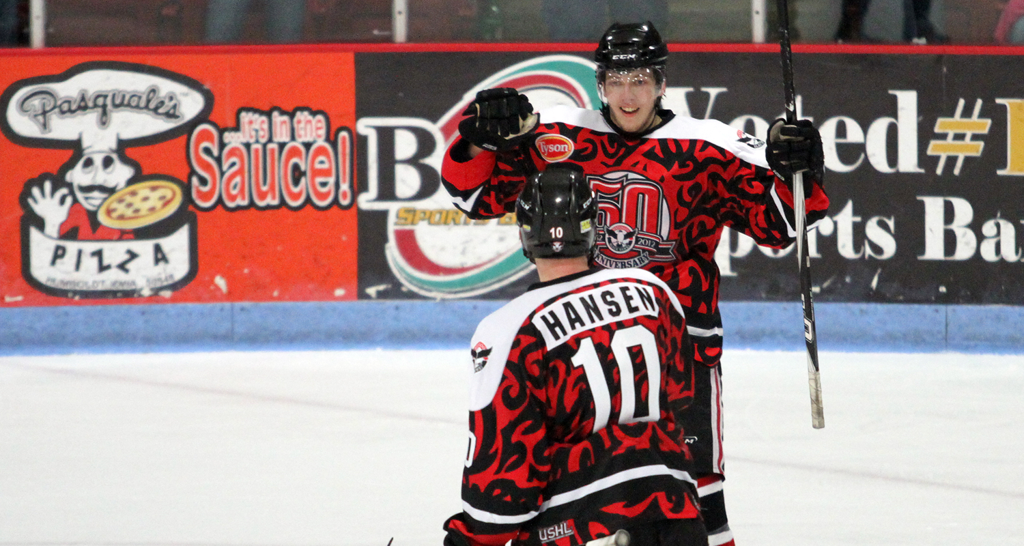 Just in time for the theatrical release of Star Wars: The Last Jedi, the Hawks held the organization’s first-ever Star Wars Night.  Star Wars characters brought a taste of The Dark Side to Young Arena for the game against the Muskegon Lumberjacks.  Bearing a lightsaber, Darth Vader factored prominently on the front of these jerseys, which also included a variety of other images and symbols from the SciFi film series, including the helmet of a storm trooper, an imperial space fighter, and the Death Star.  More than 3,000 fans came to the rink to cheer on the Hawks during the game. 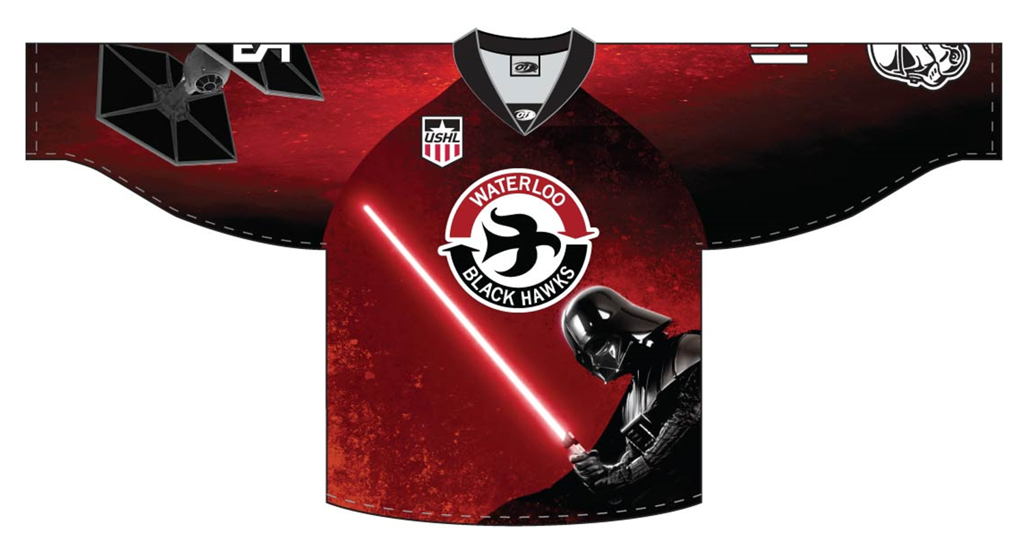 Just after Veteran’s Day in 2010, members of the National Guard 1st Battalion, 133rd Infantry were actively deployed in Afghanistan.  The Black Hawks took the ice wearing an olive and gray digital camouflage pattern similar to the style being used by military units.  More notably, the shoulder of these sweaters included 1/133rd “Red Bulls” emblem.  This mark has an association with Iowa soldiers serving in various conflicts all the way back to World War I.  The “Ironman” nickname was bestowed based on the unit’s long service in Europe during World War II.

With special permission from the United States Hockey League, the Black Hawks wore two special jerseys simultaneously during C.J. Motte’s 32-save, 3-0 shutout of the Des Moines Buccaneers.  While the color scheme and trim were the same, half of the club took the ice with the Waterloo police logo on their chest, while the other half appeared with the Waterloo Fire Rescue emblem.  The auction after the November 21st win included a special item: one of the jerseys had been signed by country music star Dierks Bentley, who had skated with the team a week earlier. 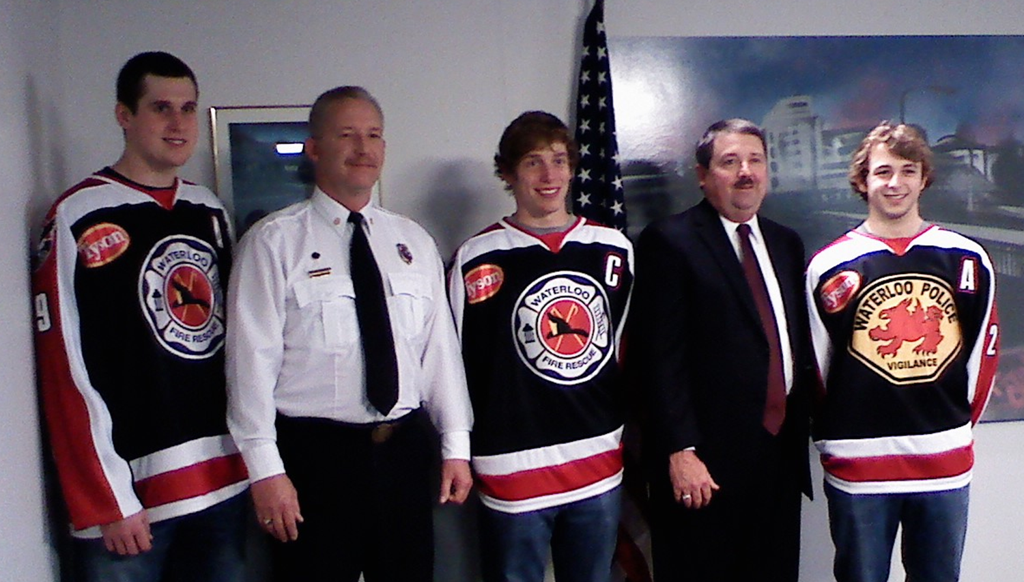 Taking the ice in one of most popular jerseys the team has ever worn, the Hawks played inspired hockey with a pair of wins during the weekend of the Pearl Harbor anniversary.  The Pearl Harbor sweaters displayed an iconic image from the aftermath of the attack and the words: IN REMEMBRANCE DECEMBER 7, 1941.  Above the Black Hawks logo on the front of the jersey, an American flag flowed from left to right across the chest.  During the weekend, the team was proud to host the family of William Kvidera of Traer, who gave his life in service aboard the U.S.S. Oklahoma. 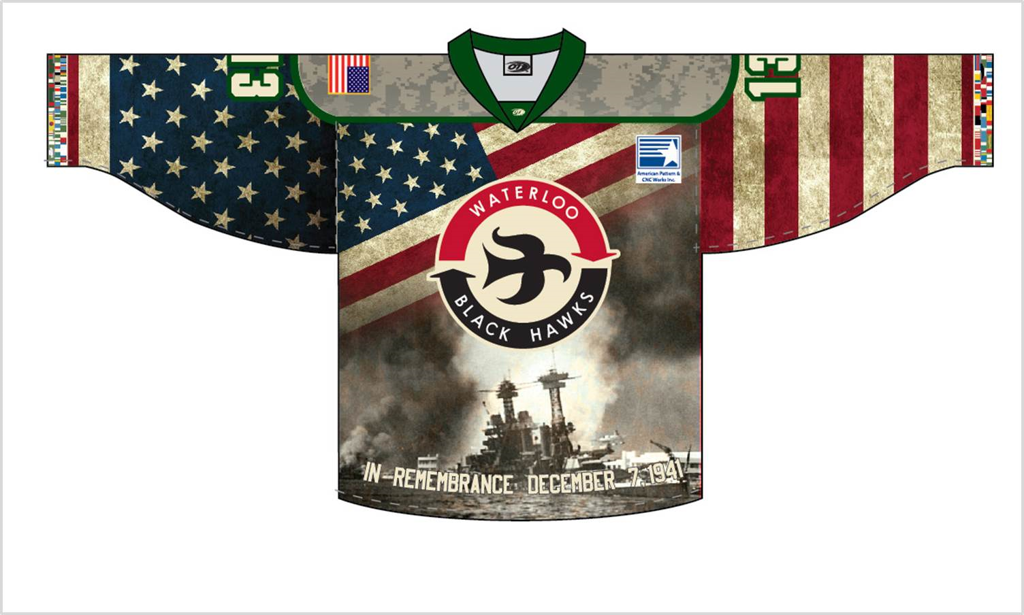 Just about every sports fan in the Cedar Valley had reason to be excited when the Black Hawks stepped onto the ice wearing the UNI Panther logo and colors for a game against the Green Bay Gamblers.  Excitement was high for both teams.  Just over a week earlier, the Panther men’s basketball team had stunned Texas in the NCAA tournament, while the Panther women reached the third round of the WNIT.  Enthusiastic Panther and Black Hawk supporters raised over $11,000 for the Northeast Iowa Food Bank during the auction which followed the game. 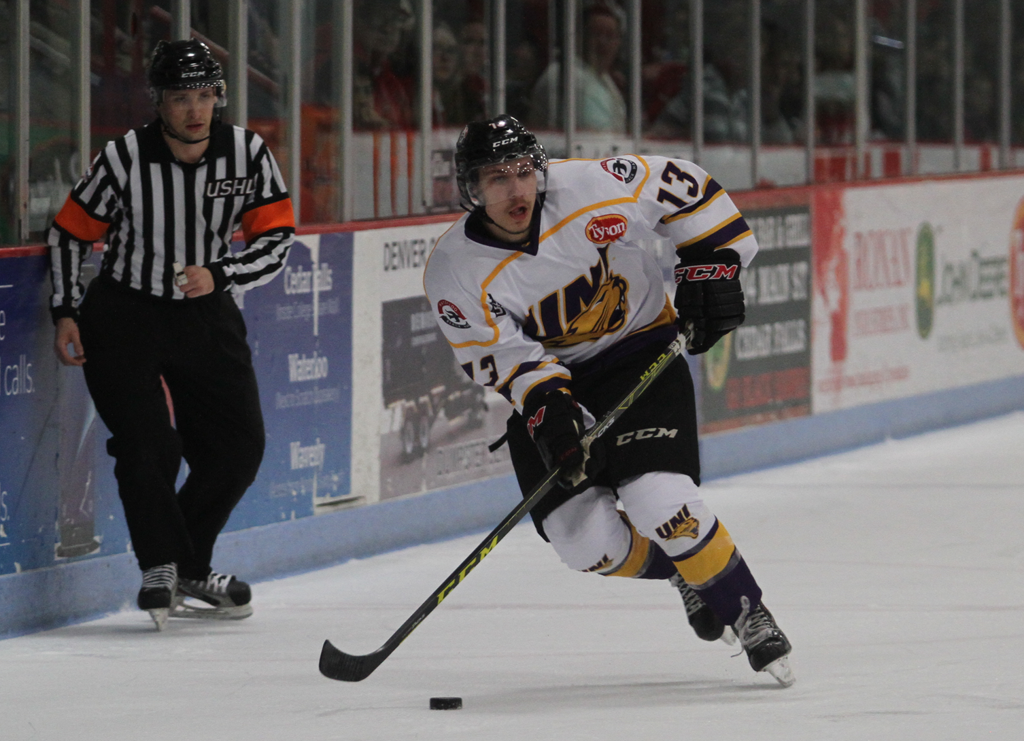 The 100th anniversary of John Deere tractors held special significance for farmers all over the world, but no community had the right to be prouder of the milestone than Waterloo.  Deere & Company’s purchase of the Waterloo Gasoline Traction Engine Company in 1918 meant that John Deere tractors were built in Waterloo before they were made anywhere else.  The Hawks and officials from Deere & Company collaborated to create a jersey design based on the logo which appeared on Deere products from 1940 through 1956, featuring that era’s leaping buck under the words “Quality Farm Equipment.”

In the middle of World War II, Americans on both coasts and everywhere in between knew about Waterloo, Iowa, and it’s Sullivan Family.  Brothers George, Frank, Joe, Matt, and Al died while serving together aboard the U.S.S. Juneau in the Pacific.  In the months which followed, parents Alleta and Thomas, and sister Genevieve became heroes in their own right as they traveled the country to build support for the war effort.  Seventy-five years to the week after the Juneau was lost during the Battle of Guadalcanal, the Hawks wore a mostly blue jersey which included an image of the five brothers together as well as a “Never Forget” 75th anniversary logo created by The Sullivan Brothers Iowa Veterans Museum. 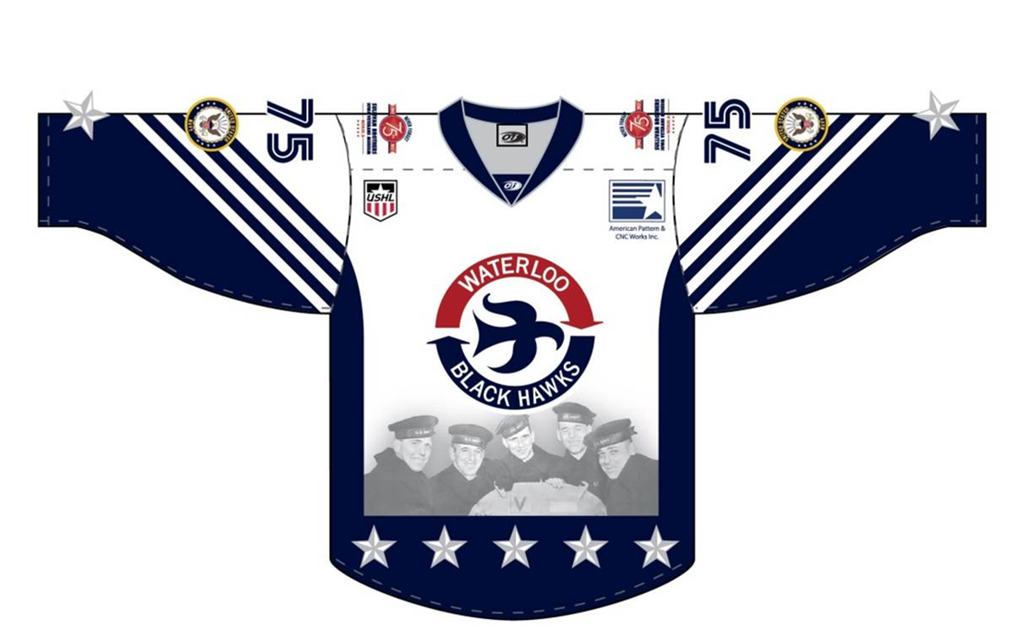