For more than a decade, the Waterloo Black Hawks have honored those who have served in our nation’s Armed Forces by wearing a patriotic or military-themed jersey during an annual weekend dedicated to veterans; in the 2020/21 season, that weekend will be Saturday, March 13th and Sunday, March 14th as Waterloo hosts the Lincoln Stars and Tri-City Storm at Young Arena.

“It has been customary for the organization to honor veterans in mid-November around Veterans’ Day or, during some recent seasons, on Pearl Harbor Remembrance Day,” said Black Hawks President of Business Operations Joe Greene.  “Due to the uncertainties of the COVID-19 pandemic, it was not possible to follow the typical schedule this season, but I have no doubt that Black Hawks fans will respond enthusiastically, and hopefully many of our former servicemen and women will be able to be with us next weekend.”

For the seventh consecutive season, American Pattern & CNC Works will be the presenting sponsor of the team’s military jerseys.  Live bidding for the sweaters will be conducted following Saturday’s game (the Hawks will still wear the jerseys Sunday; winning buyers will be able to pick up their jerseys during the following week).  The auction will benefit the Miehe Veterans Transitional Home on East 9th Street in Waterloo.  The facility is administered by Americans for Independent Living and offers accommodations for servicemen in need, as identified by the Veterans Affairs Commission of Black Hawk County and the Hawkeye Area Community Action Program.  The Miehe Veterans Transitional Home opened in 2017 with a goal of reducing veteran homelessness in Black Hawk County.

Fans can now see this season’s military jersey below.  The design is primarily black and silver.  The Black Hawk logo appears on the chest amid a field of silver-blue stars and above a sweeping band of red and white stripes.  Numbers on the back are a camouflage silver, matching the design at the waist below the stripes.  Player names appear across the shoulders on a nameplate which evokes a military identification tag.  The American flag is positioned on both shoulders.

The team is encouraging electronic ticket purchases this season as part of the Young Arena COVID-19 Readiness Plan.  Among the plan’s contents, fans are reminded that face coverings are required to attend Black Hawks games amid Waterloo’s continuing face covering resolution. 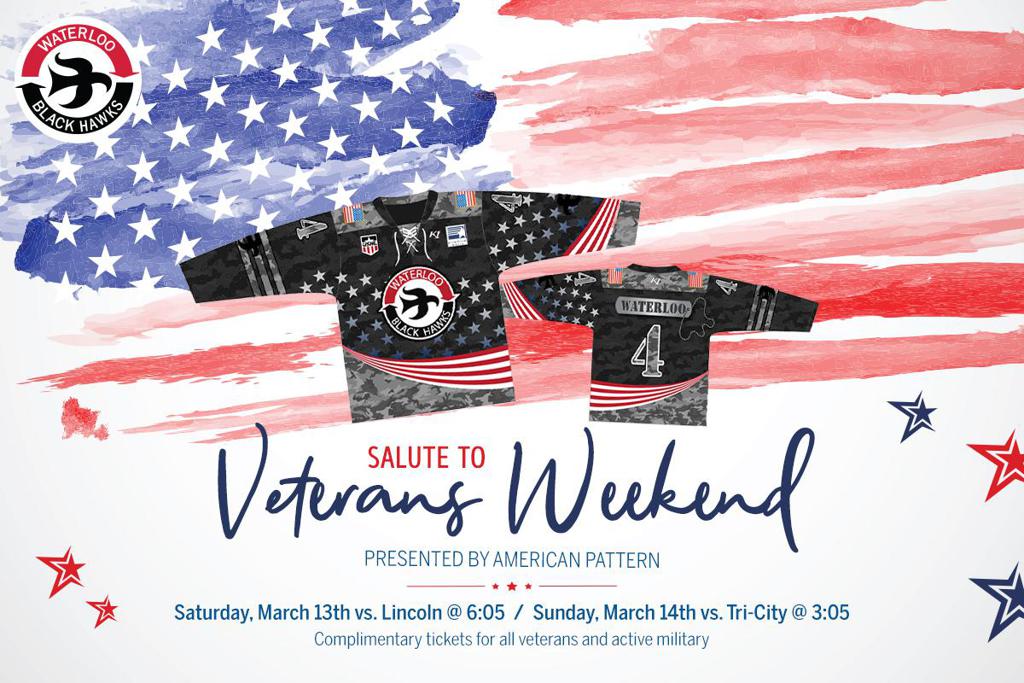