The Black Hawks-RoughRiders rivalry was interrupted after more than two decades as the result of significant structural damage to Cedar Rapids Ice Arena caused by the August 2020 derecho.  The storm resulted in the RoughRiders being sidelined for the entire 2020/21 USHL season.

“Hockey fans up and down the Cedar River have missed the big games between Waterloo and Cedar Rapids, and really, every meeting is a big one to the players and fans of both organizations,” said Black Hawks President of Business Operations Joe Greene.  “It is tremendous to have the RoughRiders here to start the schedule as they make their return, and we look forward to having a building packed with hockey fans to rekindle this great rivalry.”

The Hawks and RoughRiders will meet two other times at Young Arena during Waterloo’s 30-game home slate.  That includes a November 25th Thanksgiving contest which will be the Hawks’ 50th home game on that holiday.  Waterloo and Cedar Rapids will collide for their 21st head-to-head Thanksgiving contest; the Hawks did not play on Thanksgiving in 2020 due to disruption caused by the COVID-19 pandemic.  The final Young Arena tilt against the RoughRiders will be January 22nd.

Other highlights of Waterloo’s 2021/22 home schedule include:

• Four matchups versus the Dubuque Fighting Saints (October 16, November 5, February 25, and April 2).
• A Thanksgiving Eve game against the Madison Capitols on Wednesday, November 24.
• For the second consecutive year, the Des Moines Buccaneers visit on New Year’s Eve.
• The schedule wraps up on home ice, also versus Des Moines, on April 23.

In total, the Black Hawks will play 62 games in 2021/22.  The first two regular season contests will be on neutral ice as part of the USHL Fall Classic in Cranberry Township, Pennsylvania.  Waterloo’s trip to that event will see the team take the ice September 23 and 24 versus the Green Bay Gamblers and Youngstown Phantoms respectively.

Season tickets for Waterloo Black Hawks hockey are currently on sale and can be ordered directly through tickets.waterlooblackhawks.com.  The club will also be reintroducing popular seven-game ticket packages which were suspended last winter due to capacity limits created by the coronavirus.  Single-game tickets will be available at a later date.  For more information about Black Hawks ticket and hospitality options, please visit waterlooblackhawks.com. 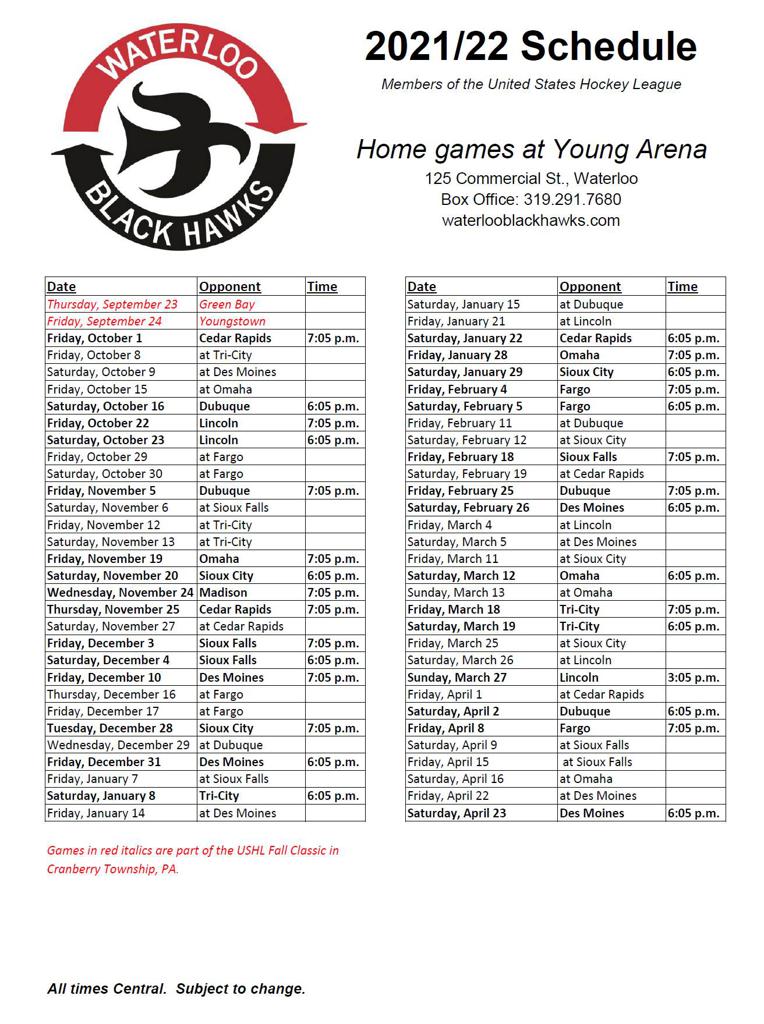