Mixes Fresh and Familiar Elements into an Original Look

A brand new Waterloo Black Hawks logo will welcome fans to Young Arena for the 60th season of hockey in the Cedar Valley.

The team provided the first look at the recast insignia on Tuesday, days before a 30-foot version is installed within the rink’s ice later this week ahead of the 2021/22 campaign.  The design retains the Waterloo Black Hawks’ name in a circle around a Hawk silhouette.  However, the text, the shape of the bird, and the former arrows of previous seasons have all been restyled, while the team has added a third elemental color: silver.  In addition to the design’s placement within the ice, the emblem will become prominent elsewhere in Young Arena and throughout the Cedar Valley during the weeks leading up to the season.  The crest will also be featured on Hawks jerseys when the team opens their home schedule on October 1st, and merchandise bearing the new insignia will be available soon. 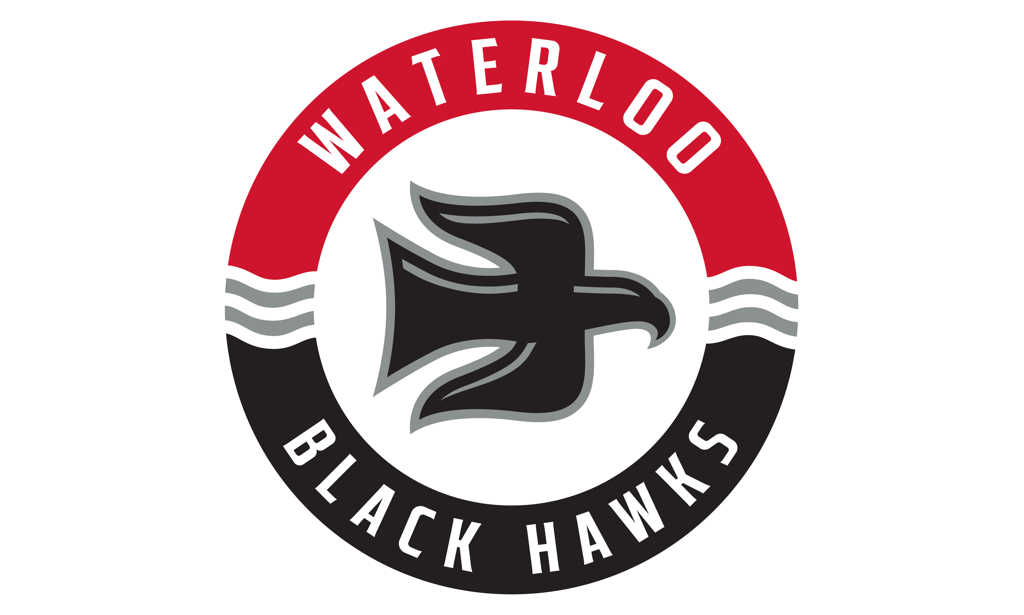 “I believe our fans will be excited about this new look,” said Black Hawks President of Business Operations Joe Greene.  “We spent quite a bit of time on this project, because we were balancing two important counterweights.  On one side, there is the long and proud history of our organization, with all the important moments of the past which our fans have experienced; on the other, reaching any longevity milestone is a time to look to the future, and perhaps there is no time better for that than after COVID-19 has impacted the last two hockey seasons.”

The Black Hawks enlisted artist Brian Gundell to assist with the new logo.  Gundell’s previous credits include design and insignia projects for multiple teams in Major League Baseball and the National Football League.  One of his most recent efforts was the secondary mark (a barbed anchor) for the National Hockey League’s newest team: the Seattle Kraken.

“On behalf of the organization, I would like to thank Brian for helping us realize our vision,” said Greene.  “We were impressed that his portfolio included many other teams with long histories, like ours, as well as clubs that are just starting to build relationships with their fans.”

Among the most significant changes to the new Black Hawks design are two pairs of arcing silver stripes, which evoke the arrows of earlier logos, while also signifying the flowing Cedar River.  Besides Young Arena’s presence on its banks, the Cedar’s course was also foundational to the development of Waterloo, Cedar Falls, and other communities of the Cedar Valley in the mid-19th century.  It remains an important link unifying the cities and the people of the region.  The Cedar River has also been the center point of Waterloo’s downtown revitalization – of which the Black Hawks and Young Arena have contributed for more than a quarter century – and to which the community has committed future investment that will make the city attractive and vibrant far into the 21st century.

The redesigned Hawk at the center of the design maintains the essence of the raptor first appearing in the 1960s and which has been present for many of the organization’s brightest moments during the past decade.  However, the silhouette now has more symmetrical, streamlined artwork.  The addition of silver highlights also provides greater sensation of motion as the organization flies forward in the development of hockey’s forthcoming generation of stars.

The addition of silver to the team colors also appears in an outline which surrounds the emblem’s hawk.  Silver was chosen to add sheen to the logo, while evoking the long experience of the Black Hawks organization.  Since 1962, the team has invited generations of fans to weekend matchups, introducing the sport to an audience consistently quick to learn and to love the game.  No United States Hockey League team has been at work developing fans and players longer.

Season ticket packages for the 60th year of hockey in the Cedar Valley are available now.  More information and the Black Hawks’ complete 2021/22 schedule are available from waterlooblackhawks.com.