Where Are They Now: George Hughes & The Next Shift

There aren’t many high-level hockey players who step off the ice for the last time, then never return to the rink.  Many make their way into coaching, whether that means volunteering in their own child’s youth program or giving private lessons or standing behind the bench in a suit on game night.  Others might start or join a hockey-related business.  A lucky few get the chance to be part of an NHL team staff.

Former Black Hawks defenseman George Hughes found a pathway to hockey’s highest level after his playing career was over.  From Waterloo in 2008/09, he advanced to St. Lawrence University for four years, then spent a season in the minor leagues.  Next, Hughes joined the production team at NBC Sports.

“I did that for five years, and I learned a lot, and it was great to be working with hockey every day,” says Hughes, who might still be doing the same thing today if the COVID-19 pandemic hadn’t ended the NHL schedule in March of 2020.

“There were a huge amount of layoffs in television and so many other industries.  I was part of that, but out of that negative, I think, came a positive.”

Hundreds (or probably thousands) of new podcasts sprang out of the coronavirus lockdown, including The Next Shift, which Hughes started with his St. Lawrence teammates Sean and Ryan Coffey.  Still going strong well over a year later, The Next Shift now has produced more than 80 weekly episodes.  The series tells the stories of retired players who have found new opportunities and challenges after retirement.  Their motto is: The Game Never Ends, This is Just Your Next Shift.

Hughes notes that it took a little while for he and the Coffeys to find the right subject matter.  Their original podcasting foray was focused on hockey gear.  “Sticks In” was short-lived, but gave the group a valuable entry into working together on audio production.

“As much as we enjoy talking about hockey equipment, we wanted to talk about real issues that we were dealing with,” Hughes says.  “We found that was life after hockey.  ‘How are we dealing with life when the game ends?’  Because you dedicate your whole life to the game of hockey since you’re three years old…it has to end for everyone at some point, and your whole identity is wrapped in it.”

The list of guests willing to share their experiences has already been impressive.  Superstars like Ray Bourque, Mike Richter, and Jeremy Roenick accomplished almost everything imaginable during their long careers, yet each of them has now been retired for nearly as long as they played in the NHL.  Eddie Olczyk and Keith Jones might be better known to youthful hockey fans as broadcasters than players.  Former Waterloo Black Hawks James Marcou, Lee Moffie, and Eriah Hayes each had ties with the San Jose Sharks, although only one had the chance to skate through the toothy sharks’ head at SAP Center.

The Next Shift team also spent approximately an hour with Craig Cunningham, who lost a leg and nearly his life playing the sport.  Going into cardiac arrest during an American Hockey League game, Cunningham’s life changed with jarring suddenness.  Tommy Smith suffered a catastrophic injury too, leaving him paralyzed, yet determined to make a difference in the sport by raising awareness about spinal cord injuries.

“Anyone that’s really able to figure it out after the lights go out in your hockey career is inspirational to us,” reflects Hughes, “It’s so difficult if you’re not prepared for the end.”

Hughes is hoping to reach current players with that message.  As a result, The Next Shift has adopted other communication channels beyond the long-form interviews that comprise each podcast episode.  The website, nextshift.biz, has space for a blog, a message board, and links to all of the popular social media platforms.

“We have our Instagram, we have our Twitter, we have our LinkedIn,” Hughes notes.  “And nowadays, the way I view Instagram is that not everyone wants to listen to an hour-long podcast, so if you can make a great minute-long clip that can inspire someone, that can be your ‘episode’ in a sense; that can be a win.”

The Next Shift has grown, even as the most disruptive effects of COVID-19 have passed.  Hughes is still interviewing, editing, and adding social media content while also working a new fulltime job.  In addition, he is also on the ice coaching the Mid Fairfield Jr. Rangers Bantam team in Connecticut.

Working directly with players in their mid-teens - as well as talking to their parents - offers an interpersonal way for Hughes to share what he has been hearing each week.  The interaction with aspiring skaters also provides insight in how the hockey environment has morphed in only the short time since he was playing.

“I think social media has changed hockey so much, some [for] good, but there’s also a lot of bad,” Hughes says.  “It’s just so easy to get wrapped up in things you cannot control with social media, so that would be my message to parents and players out there, just ‘control what you can control.’”

Hughes adds that one of the things that developing players would be well-served to experience is the self-determination hockey can naturally instill.

“When we were growing up playing, the way we really learned how to play the game was on the pond with our friends.  That allows for a certain type of creativity: to be able to understand the game and to figure it out yourself.  I think the game has gotten dumbed down to a point where there’s too many players going through cones.  Yes, you can improve your skills, but once you’re thrown into the fire of a game where you have to make these split-second decisions, you might not be able to do it if you’re only working on your edges.”

Although Hughes made that statement specifically about player development, it’s also a metaphor for what hockey is capable of teaching about life, when given a chance.  He adds that athletes are subject to a tremendous amount of goodwill, but for most that sentiment comes with an expiration date.

“People really do care about you and your story while you’re in the game of hockey, and you need to leverage that into opportunities,” Hughes suggests.  “I think that’s a big part of our message.”

Having spoken with dozens of former players who have found their way since stepping off the ice, Hughes says the best advice he has heard – for current players, ex-players, and everyone else – came from a former Stanley Cup winner.

“We had Marty St. Louis on in Episode 23, and one of my favorite quotes from him (and this could be for hockey or anyone), he said ‘I wasn’t necessarily the best player coming up, but I was the best at getting better.’  That just really stuck with me and I try to take that mantra into whatever I do now.”

With that mindset, The Next Shift has the chance to be a valuable resource far into the future.

Editor’s Note: Hughes is not the only former Black Hawk involved with a podcast that seeks to inspire listeners.  Former Waterloo goaltender Garrett Metcalf is part of the team which has produced Adversity University.  In more than 50 episodes so far, the series has featured the personal stories of gold medal Olympians, Super Bowl champions, Navy SEALs, Hall of Fame NHL players, and many more who have achieved great things despite the odds against them.

Where Are They Now is presented by Karen’s Print Rite, 2515 Falls Avenue in Waterloo. 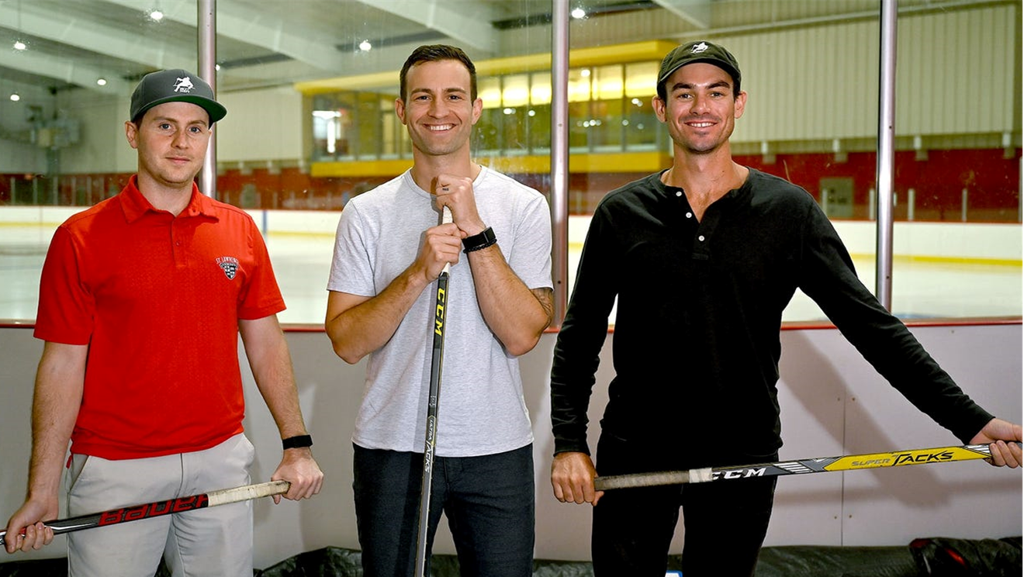