Where Are They Now: Jacob Bengtsson

Lake Superior State University has reached Christmas break, providing defenseman Jacob Bengtsson a travel window for a trip home to Sweden before the second half of the hockey season.  The sophomore has already done at least a season’s worth of scoring with two goals and 18 assists in 22 games.  That has helped the Lakers to a competitive start the Central Collegiate Hockey Association; “Lake State” is 7-7-0 in conference, with an 11-10-1 mark overall.

Earlier this week, Jacob shared some insights before he flew back to Sweden for the holidays.

Black Hawks: Comparing your scoring numbers this year with your Waterloo stats over a couple seasons, (109 games, three goals, 26 assists), it certainly seems like you have found some scoring touch at the NCAA level. What's working well for you right now?

Jacob Bengtsson: I just feel like we, as a team, are generating a lot of offense. And I'm playing with good players like Louis Boudon and Harrison Roy in our power play, and I feel like we've been doing well there. So that's a big part of it. But we have a really good team and have been successful so far.  I had a more defensive role in Waterloo. And now I have a really offensive role here in Lake Superior, and I think that has a big part to do with it.

BH: What's been the highlight so far this season?

JB: We get to play some out-of-conference games this year that we couldn't do last year, and that's been really fun. And just introducing the CCHA back again, it has a lot of history behind it. So it's good to have it back. And I feel like all the teams included are really good. So it's been a great year so far, and it's going to be tough but still be fun the rest of the season.

BH: The Lake Superior State program has some pretty deep roots, and you could say the same thing about a number of other programs in the conference.  For Black Hawks fans who might not be really familiar, who are the Lakers’ rivals? Who do your fans get up for? Who does the team get up for when they're on the schedule?

JB: So we are in the Upper Peninsula in Michigan, so especially Northern Michigan and Michigan Tech who are up here as well. That's our two biggest rivals. And they’re hard-fought games every time…low-scoring and just really, really tough hockey games, but it's really fun as well.

BH: Last weekend, the Lakers had a couple of wins against Northern Michigan.

JB: Yeah, that's right. It was a huge weekend for us.  Northern Michigan came from sweeping Duluth, who was number one in the country.  I felt we did a really good job on taking down a really good hockey team.

BH: You mentioned that this year you can play some games out of conference. Could you talk about some of the other differences from last year to this year as you're now a sophomore for the Lakers?

JB: So last year, we didn't have any fans at all during the whole year in college, and so I didn’t really know what to expect for this year. But after being in college hockey with fans, it's really cool with all the different traditions from different arenas and our traditions up here, so it's incredible.

BH: When it comes to the weather up in the Upper Peninsula, there’s a reputation for very cold temperatures and certainly a lot of snow.  How has the weather been, and from a weather standpoint, was it a bigger adjustment coming to Waterloo or going to Lake Superior State compared with your experience growing up in Sweden?

JB: So the last two weeks we've been having snowstorms on and off; it's been snowing a lot and been cold, but everyone up here is kind of prepared for it. So it's not too bad, but you definitely get surprised when you get up in the morning and it's been snowing two feet of snow overnight.  The biggest difference is that it’s way colder both in Waterloo and up here than it is back home. We have a little warmer weather in the winter and not as much snow as either here or Waterloo. So that's what's probably like the biggest difference for me.

BH: Getting the chance to go home now, over this stretch where Lake Superior State has some downtime, what has travel been like for you as an international player and as a college student going back and forth? How has that been with COVID in the background?

JB:  The airplanes haven't been that full, [but] a lot of COVID testing, and a lot of quarantining time when you're entering a new country. Things like that.  But it's going to be exciting to go home and see my family, because they haven't been able to visit this half of the year. So that's going be really exciting.

BH: We're only a few weeks past the annual Waterloo Thanksgiving game.  Back in 2019, you had a really good night on Thanksgiving with a goal and an assist. Is that one that stands out in your memory from the 100 or so games that you played as a Black Hawk?

JB: Oh, yeah, for sure. The Thanksgiving game is something special. The guys in the locker room are looking forward to it every year.  My family actually got to experience it the second season I was there, and I was lucky to have a helper there on the first goal [scored by Xander Lamppa] and was on the ice for all the teddy bears. That was really exciting.

BH: We’re two years down the road from your time as a Black Hack. That's a long time in the development of a still relatively young player. What would Black Hawks fans see that's most different in your game today, compared with when you left Waterloo a couple of years ago?

JB:  I would say the biggest difference is that I have more confidence in my game.  I can play both ways and probably come through contributing more offensively than I then I did in Waterloo. I feel like the numbers are showing that this year as well. They have a lot of trust in me up here and a lot of faith in my game as a hockey player. So that's something I'm very, very thankful for.

BH: The number of players coming to Waterloo from Europe has certainly been dramatically impacted by COVID-19. Hopefully in the future we'll have more players from outside North America back in Black Hawks jerseys. Looking out towards that and thinking about your experience, if there was a player coming over from Europe to play for the Hawks or in the USHL, what would your advice be to him?

JB: My first couple of weeks, it was really hard traveling halfway across the world from my family. You kind of wanted to - not really go home - but you kind of wanted to give up a little bit in the beginning, because it was tough with a new style of hockey. You're living in a billet family instead of living with your parents and stuff like that. So I feel like you just have to get used to the lifestyle and the hockey for the first couple of months, and then when you're getting into it, you're going to feel like home in the United States, and that's probably the biggest thing.

Where Are They Now features are presented by Karen’s Print Rite at 2515 Falls Avenue in Waterloo.  Photo courtesy of Lake Superior State Athletics. 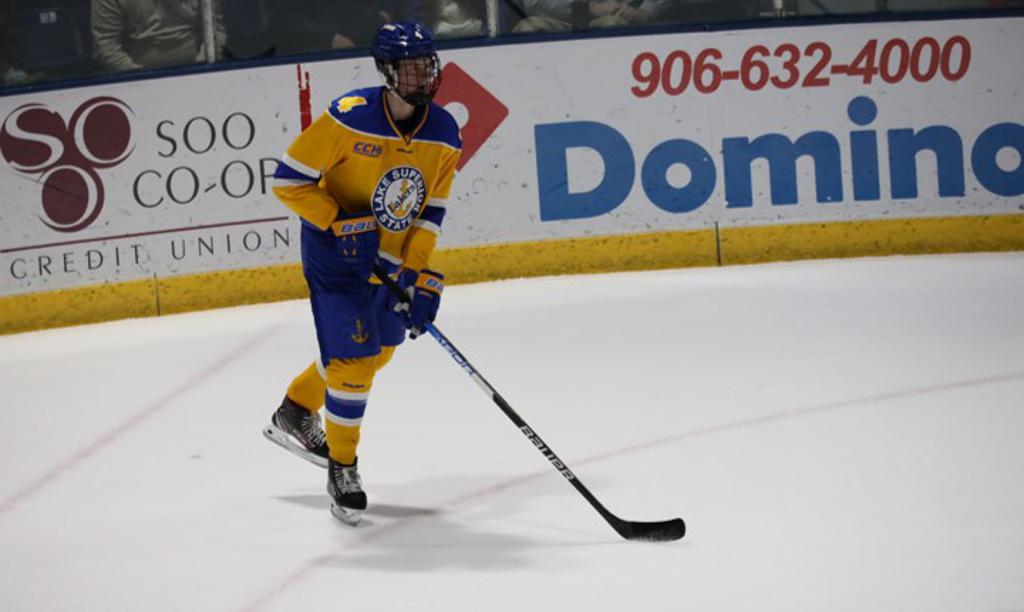