Where Are They Now Feature: Black Hawks vs. China, 2010

The 2022 Beijing Olympics are underway.  Even before the grandeur of the official opening ceremonies on Friday, competition has already started.  That includes the Women’s Olympic Hockey preliminaries, with perennial favorites Team USA and Canada, plus countries as diverse as Denmark, Japan, and the host Chinese.

Winter athletes from all over the world have made their way to the venues where they will compete and anticipation has been building for the next two weeks of competition.

Nearly a dozen years ago, a group of Chinese hockey players arrived at Young Arena in Waterloo.  There was far less fanfare for a single Sunday afternoon of international hockey, but the day provided three memorable periods for the Black Hawks who participated, plus the small group of fans in attendance.

The initial 2010/11 Black Hawks roster included 18-year-old forward Guan Wang.  His father, Anfu, had come to the United States after first taking the ice in his native China, rising as far as that country’s national team.  Eventually as a student at Iowa State University, Anfu joined the school’s club team and helped the Cyclones to an ACHA National Championship.  A generation later, Guan was hoping for his own college hockey opportunity by way of the USHL.

“He was a great teammate and person as well,” remembered Hawks goalie Eamon McAdam, who was simultaniously seeing the USHL for the first time that fall.  “[Guan] was always very kind to me, and I can't remember one time where anyone was mad or even frustrated with him.  Just a quiet, positive person.”

Through Anfu, the Black Hawks were notified about a Chinese team traveling through North America, looking for games that autumn.  Would Waterloo be interested in an exhibition just a few weeks after the USHL regular season had started?

“Conversations about the game started around the locker room midweek,” said forward Tyler Zepeda, who was playing his second season as a Black Hawk in 2010/11.  “The chatter was we were going to be playing a game Sunday.  Normally this would be our day off. I think for me personally, my thoughts were it was exciting to be a part of an event that may never get a chance to do again.”

The game was penciled in for October 10th, with puck drop less than 24 hours after a 5-3 Saturday night win against the Lincoln Stars that evened the Hawks’ season record at 1-1-0.  When the Chinese team arrived around 2 p.m. that day, it quickly became clear that the matchup would be somewhat different than expected.  Waterloo officials thought they would be hosting the Chinese National Junior Team, perhaps en route to skating in a lower division of the IIHF World Junior Championships.  Instead, the players who stepped off the bus were part of a touring pro squad from Harbin, a city in northern China.  As it turned out, they ranged in age from 18 to 37.

“One of my most distinct memories of the game was when we were skating around in warmups and looking across the ice,” said McAdam.  “We all started to look at each other in shock, because we were so surprised how old everyone seemed.  There were guys with five o'clock shadows and mustaches.  For me as a 16-year-old, I was getting a bit nervous to play against those guys.”

In McAdam’s case, that surprise came on top of the tension created by appearing in his very first game for Waterloo.  He was the Hawks’ third goalie that season, practicing with the team but technically on the affiliate list.  Only Ian McCoshen – who had just turned 15 two months earlier – was younger.

For Zepeda, the age difference of the visitors was immaterial compared to having no scouting report.

“We didn’t know anything about them…We were unsure of how the game would play out, whether it would be physical or skilled,” he said.  “Honestly, I had no idea about the age difference until we got done with the game.”

Meanwhile, the Black Hawks front office was sent scrambling to address last-minute challenges.  What were the formalities for an international game?  Was it necessary to present a gift to the visiting coaches or players?  Was the Chinese national anthem available to play from YouTube before the opening faceoff?  If this wasn’t China’s National Junior squad, was there a roster available?

When the player list was pieced together, it showed at least six members of the 2010 Chinese MEN’S National Team.

The game had been publicized less than a week earlier.  The curious matchup at the rink was not enough to convince most hockey fans to change their plans for a warm mid-October Sunday.  A crowd of only several hundred people had found their seats by the time the two national anthems played.

It took a Waterloo power play for the Hawks to record the day’s first goal.  Jacob MacDonald whistled a wrister into the net from the top of the right circle almost six minutes into the game.  The Hawks stacked up three more goals near the end of the period from Jamie Hill, Luke Hannon, and James Hansen.  Guan Wang had the lone assist on Hansen’s goal.

After a scoreless second, Waterloo added three more in the third period.  Tyson Fulton, Alex Guptill, and Hannon were responsible.  The Hawks outshot Harbin 47-9 in the 7-0 victory.  If McAdam was apprehensive, teammates in front of him made it an easier day than expected.  The 16-year-old pitched a shutout the first time he put on a Waterloo jersey in a game situation.

As the season continued, McAdam had the chance to play in four regular season games, winning twice.  Zepeda led the 2010/11 Hawks with 31 points (15 goals, 16 assists), despite missing six of 60 regular season games.  In a tough year, Waterloo clawed into the last playoff spot during the spring of 2011.

Yet for a number of players, that winter would be foundational to great success in the seasons which followed.  Waterloo reached the Clark Cup Championship Series against Green Bay at the end of the 2011/12 campaign, with bigger contributions from players like McAdam, McCoshen, and Vinnie Hinostroza, who had all been among the youngest Hawks at the time of the Harbin exhibition.  Then in August of 2012, Waterloo’s next international experience happened on a truly world stage.  Behind McAdam’s play as the most valuable goaltender at the World Junior A Challenge, the Hawks won silver a silver medal representing the United States in Omsk, Russia.

Zepeda was not among the players who spent two summer weeks in Siberia.  He had moved on to college in the fall of 2012 following three years with the Hawks.

“I missed the trip to Russia that happened the year after I had left,” said Zepeda, still disappointed. “For me - and I would argue that most players would agree - it’s an honor to represent and play for your country, no matter what sport or event.”

In McAdam’s case, his initial junior hockey appearance against Harbin – the first time he had ever seen an opponent from outside North America – perhaps foreshadowed the direction hockey has now taken him.  After being drafted by the New York Islanders, playing for Penn State, and minding the crease for several AHL and ECHL teams over five seasons, this winter McAdam is playing in Denmark.

“It was always such a special experience growing up playing against foreign opponents, even teams from Canada,” McAdam reflected.  “You always thought they were so different from you for any number of reasons.  Expectations were always high going into those games.

“It is so funny now, playing professionally over in Europe, and looking back on all those expectations of the kids being so dramatically different.  That idea was so off base.  Hockey is such a small world and kids all across the world have such similar stories in the locker room about growing up in hockey.  You see it now that we're all grown up and playing together.”

More than a decade has passed since Waterloo and Harbin represented their countries in a friendly Cedar Valley exhibition in front of a smattering of spectators.  Undoubtedly, there will be a few more eyes on Beijing when the United States meets China during the Olympics one week from today.

Where Are They Now Features are presented by Karen’s Print Rite, 2515 Falls Avenue in Waterloo. 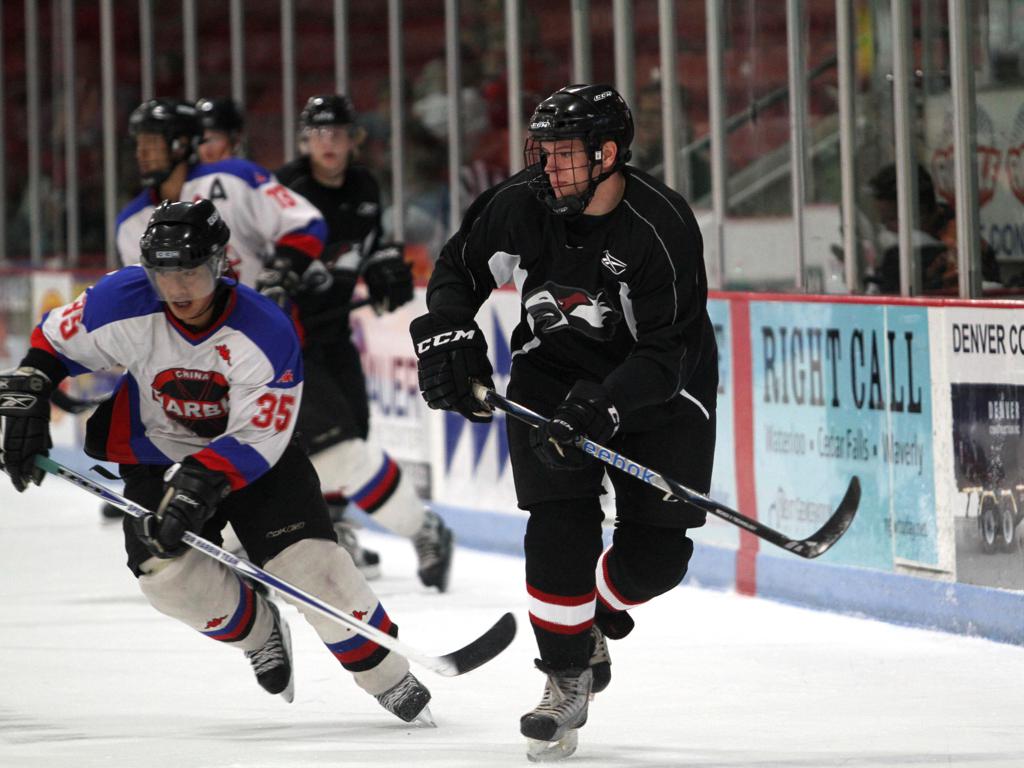 Jacob MacDonald during a 2010 game against a touring team from Harbin, China. Stephanie Lyn Photography.