Where Are They Now Feature: Olympic Tune Ups

The 2022 Olympic Men’s Hockey Tournament is officially underway.  The first game for the United States will be tomorrow morning (Central Time) against China.  Even without NHL stars in this year’s competition, the process of choosing the team that represents the United States is much different today than at earlier times.

In 2022, the best available players were brought together from their colleges or international pro clubs with just a matter of weeks notice.  Five or six decades ago, the national team would travel the country (and often beyond) playing exhibition games to both prepare for the Olympics and assess the players competing for a spot on the final roster.  For good measure, the pre-Olympic tour was also often a source of funding to help send the national team across the globe to Europe or Asia.

During the 1960s and 70s, the Black Hawks were a “senior” team, with a roster of post-college aged players.  Along with the USHL’s other clubs in Green Bay, Rochester, Marquette, and elsewhere, the league was occasionally the source of Olympic talent.  It was also a competitive proving ground for the U.S. squads which hoped to bring back a medal.

Player/coach Oakie Brumm’s jubilant response to Waterloo’s first test against a U.S. Olympic Team captured the celebratory mood at Waterloo Auditorium: “I wish I had a jug, I’d have a drink!  I don’t drink or smoke during the hockey season, but this is an exception.”

At 11:49 of the first period, Duke Dutkowski finished Mike White’s setup that had originated behind the net.  The goal broke a 1-1 tie, and Waterloo would lead the rest of the way, thanks in part to four total goals in the opening 20 minutes.  Tim Taylor assisted on the last of those scores, on what must have been a particularly satisfying day.  Taylor – later the longtime head coach at Yale and eventually head coach of the 1994 U.S. Olympic squad – had just been released from the National Team weeks earlier in mid-November.

It was also a notable day for Bud McRae and Gerry Marttila, who recorded two goals apiece.  Paul Johnson also had two goals, but the future Black Hawks scoring ace was playing for the visitors.  Johnson – whose #11 was retired by the Black Hawks in 2002, around the time he was inducted into the United States Hockey Hall of Fame – was on his way to his second Olympic tournament.  His tally with 1:58 to go set up a thrilling finish, and Waterloo held on behind Jim Coyle’s 24 saves.  Johnson would join the Hawks fulltime beginning in 1965.

Almost exactly four years later, the National Team tour included a two-night stop in Waterloo.  Team USA dominated a Saturday night contest, scoring five times in the second period during the 8-1 victory.  Doug Volmar had a hat trick in that period alone.  After playing in the Olympics, Volmar would go on to make it briefly to an expanding National Hockey League, playing for the Detroit Red Wings and Los Angeles Kings.  Herb Brooks assisted on Volmar’s third goal.

The Hawks were much sharper in the nip-and-tuck rematch.  Dave Mazur had a hat trick for Waterloo and Paul Johnson scored twice – this time FOR the Hawks – but the National Team stayed out of reach, ultimately leading from 8:08 of the first period, when they scored the opening goal, until the end of the game.

The Hawks were left to wonder what might have happened in overtime, if not for a strange second period score for Team USA.  Player/coach Bud McRae described what happened after goalie Jim Coyle snagged a shot: “He caught it and dropped it back over the net.  Then it caught in the folds of the net, and when someone tipped the net to get it out, it fell through a hole in the net and the goal judge called it a goal.”

Despite that apparent bad break, Waterloo had a chance to tie the score in the closing seconds.  Keith Christiansen had already blasted in a Hawks goal from long distance in the second period.  Late in the third, he dodged traffic in the offensive zone and was barely denied from close range by goalie Pat Rupp on Waterloo’s last best chance.

The next time Waterloo met a group of future American Olympians, Christiansen would be wearing red, white, and blue for the opposing team.

The 1972 U.S. Olympic squad didn’t win gold like their 1960 or 1980 counterparts.  They did bring back silver medals from Sapporo, Japan, at a time when the Soviet Union was dominant and Czechoslovakia was on the rise.

The American team was good enough to compete with those two hockey powers and more than good enough to hold the Black Hawks at arm’s length.  Yet going into the third period of the Friday contest – Waterloo’s first appearance at McElroy Auditorium during the 1971/72 season – it was just a 2-1 score.  The difference at that point in the game was a first period rebound finish from young Robbie Ftorek, assisted by Charlie Brown.  Ftorek was just 19 at the time; he would be in the National Hockey League the following season.  Meanwhile, Brown would find his way to Waterloo during the years which followed, earning USHL All-Star honors, as well as two league Defenseman of the Year awards.

When that Friday game opened up in the last 20 minutes, the Hawks couldn’t keep pace, falling 10-2.  Dave Swick scored both Waterloo goals, the last of them with just seconds to play.

Unlike the Friday tilt, the Saturday rematch was never close.  Instead of being within a goal at the second intermission, the Hawks trailed 10-1, eventually losing 15-1, the most lopsided defeat in team history up to that time.  Of the 25 goals the National Team would score during the weekend, Keith Christiansen – now enshrined in the U.S. Hockey Hall of Fame – scored two and assisted on six others.  Brown had two goals and four assists, while Ftorek notched five points.

The final game between the Black Hawks and a U.S. Olympic Team is a story of “almosts,” starting in goal.  Like Tim Taylor in 1963, Dan Griffin had hoped his time touring with the Nationals would lead to an opportunity to go to Austria (by coincidence, the host nation in both 1964 and 1976).  Also like Taylor, Griffin’s Olympic dream deflated just as the winter holidays were arriving.

Joining the Black Hawks in early December, he earned a 3-0, 30-save shutout during his Waterloo debut against the Sioux City Musketeers.  Griffin’s appearance the next weekend versus his former National Team compatriots didn’t go so smoothly.  He was on the hook for three goals from 19 first period shots, then gave up the eventual game-winner in the second before a planned goalie swap in the Hawks crease.  Better days awaited: spending that lone season in Waterloo, Griffin was ultimately recognized as the Hawks’ MVP in the spring.

Meanwhile, Mike Randolph had previously won a pair of Hawks MVP awards.  He hoped to turn his USHL success into a spot on the Olympic roster and assisted on one of the goals which had the National Team ahead 3-2 at intermission.  Unfortunately, Randolph was not awarded a plane ticket to Innsbruck.  Despite the disappointment, he would later call the time he spent with Team USA the best part of his playing career before a legendary high school coaching tenure at Duluth East.

Defenseman Tom Machowski was also skating for the Olympic team that December day, assisting on a third period goal which helped the visitors extend their lead on the way to a 6-3 result.  The former Atlanta Flames draft pick, was hoping Bob Johnson – his college coach at Wisconsin during the four prior seasons – would include him on the final National Team roster.  It was not to be; instead Machowski would join the Hawks later that season and remain in Waterloo into the transitional years as the USHL morphed into a junior hockey league.

The U.S. win against Waterloo moved their tour record to 31-10-2.  However, at the Winter Games, Team USA finished fifth, setting the clock turning toward Herb Brooks’ all-college 1980 Olympic roster and the Miracle on Ice.

Where Are They Now features are presented by Karen’s Print Rite, 2515 Falls Avenue in Waterloo. 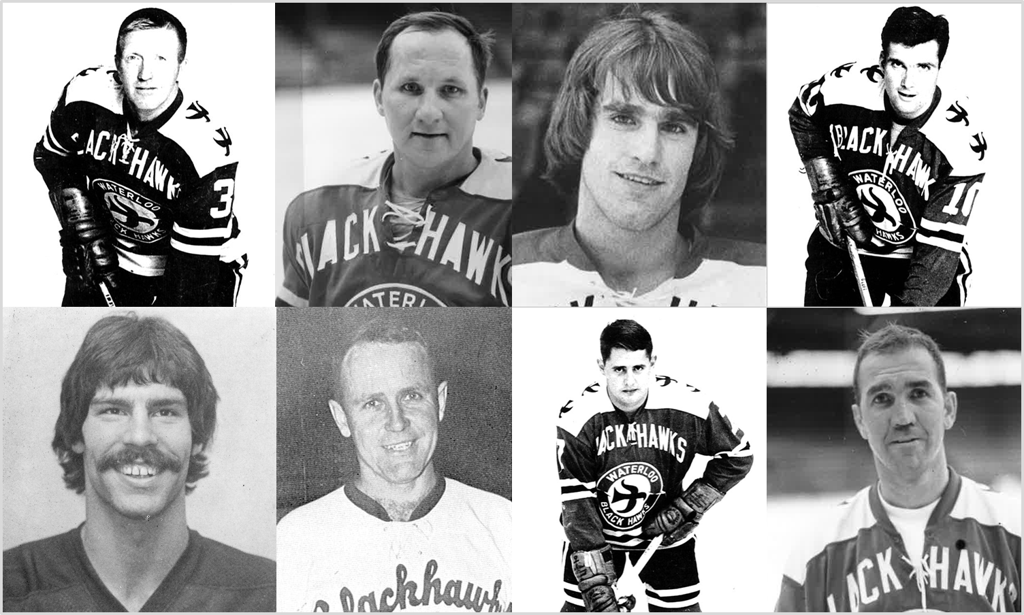