Cal Petersen is back in a Waterloo Black Hawks jersey at Young Arena this Friday – at least in effigy – as U.S. Bank presents 500 bobblehead dolls featuring the Waterloo native and current Los Angeles Kings goaltender.

Petersen is the most successful goalie of the Black Hawks’ junior era.  He is the only Waterloo alumnus to have appeared in goal during an NHL regular season game; Petersen recently won his 20th game of 2021/22 for the Kings.  Friday’s giveaway will mark the first time a former Black Hawks player has been represented in bobblehead form as a giveaway for Waterloo fans. 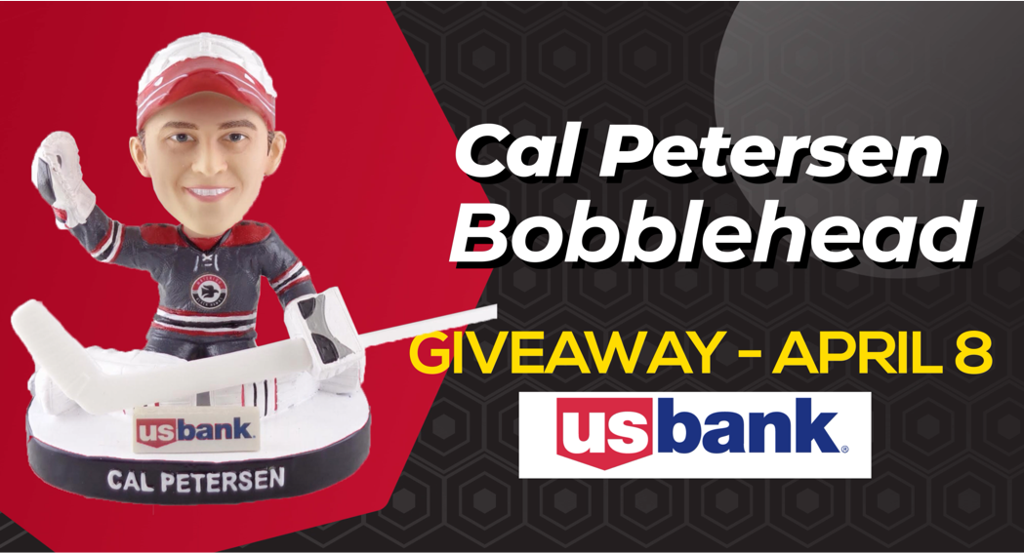 “There is a lot of pride felt about what Cal has accomplished, both within the organization and by the community at-large,” said Black Hawks President of Business Operations Joe Greene.  “This is something our fans won’t want to miss, and I would like to offer a special ‘thank you’ to U.S. Bank for making this possible.”

Petersen made his Black Hawks debut in December of 2011, just two months after turning 17.  He won that night’s 4-2 decision against the Sioux City Musketeers with 34 saves.  It was the first of Petersen’s Waterloo junior-era-record 51 regular season victories.  From that night through his final appearance in 2013/14, he recorded five shutouts and a .910 save percentage.

After being drafted by the Buffalo Sabres in the summer of 2013, Petersen led Waterloo to the Anderson Cup regular season championship the next winter.  With a 27-7-4 mark, he was recognized with USA Hockey’s Dave Peterson Goaltender of the Year Award.  He also helped Waterloo reached the Clark Cup Championship Series that spring, winning eight games and recording a .928 save percentage.

Petersen was the starting netminder at Notre Dame for three seasons beginning in 2014/15, winning 55 games.  He helped the Fighting Irish to two NCAA tournaments in three seasons, including an appearance in the 2017 Frozen Four.

That summer, Petersen signed with the Kings.  He made his NHL debut just over a year later on November 13, 2018.  Following that relief appearance, Petersen picked up a shootout win with 35 saves during his first start three nights later versus the Chicago Blackhawks.  Just a few more days passed before he earned his first shutout, making 29 stops against the St. Louis Blues.

A fulltime member of the Kings’ roster for the past two seasons, Petersen now has 87 NHL games to his credit with a career mark of 39-36-7, four shutouts, and a .911 save percentage.

The Cal Petersen bobbleheads will be presented to 500 lucky fans in attendance.  Fans will receive a random number when they arrive at the rink, with winning numbers posted at the beginning of the second period.

Friday’s game will also be UNI Panther Pride Night.  All University of Northern Iowa students, staff, and alumni can order $8 tickets.  Mascots TC and TK will also be on hand to cheer on the Black Hawks.