The ECHL’s Kelly Cup Playoffs begin tonight following the conclusion of the regular season over the weekend.  A host of former Hawks spent time in the league, some as close as Yuki Miura with the Iowa Heartlanders and some as far away as Ben Finkelstein in Newfoundland.  Before the page turns on 2021/22, here are some of the Waterloo alumni who excelled in the ECHL this season, presented in “Three Star” format.

Pecararo was called up for a couple of stints in the American Hockey League, but still led the Swamp Rabbits’ offense, despite playing in just 43 ECHL games.  His most productive of three seasons in Greenville included 23 goals and 28 assists.  Despite a limited number of appearances (the ECHL schedule includes 72 games), he still finished tied for 57th in league scoring.  Pecararo was easily his team’s top power play scorer with 17 points (seven goals, 10 assists).  He was at his most productive from November 19th through February 15th when he had a point in 22 consecutive games, churning out a total of 18 goals while setting up 19 others.  The Swamp Rabbits meet the Florida Everblades in a first round series that begins Friday.

Last season, Finkelstein and Pecararo were teammates in Greenville.  Although Finkelstein was playing in a new place this winter, his year mirrors Pecararo’s in some respects.  For instance, he played in just 36 games for the Growlers.  Nonetheless, Finkelstein still generated an astounding 62 points (11 goals, 51 assists).  No ECHL defenseman was more productive at the offensive end of the rink.  For that matter, 51 assists were good enough to rank third among all ECHL’ers, regardless of position.  He also had a +26 plus/minus differential, placing ninth in the league and third among defensemen.  Finkelstein didn’t make his season debut until January 21st, a two-point performance against the Kansas City Mavericks.  The Growlers play their best-of-seven first round series versus the Trois-Riveres Lions.

This was Winiecki’s fourth full season with the Everblades.  During the campaign, he appeared in his 200th ECHL regular season game and helped Florida to the league’s South Division championship with a 42-20-10 record.  Only the Reading Royals and Toledo Walleye had better records.  Individually, just seven other ECHL players had more points.  Winiecki turned in 70 on 33 goals and 37 assists.  That doesn’t include the three points (two goals, one assist) he notched during the ECHL All-Star game in January.  Winiecki’s most recent of five multigoal games came on April 9th against the South Carolina Stingrays.  Although the Everblades lost that one, Florida won six others in a season-ending 6-1-0 stretch.  Now Florida tries to make a deep playoff run, as they did in Winiecki’s rookie season, when the Everblades reached the Kelly Cup semifinal round.

The second-year pro finished fifth on his team and best among Allen defensemen with 38 points (eight goals, 30 assists).  Beaulieu also made one appearance this year with the AHL’s Iowa Wild.

Coatta had a team-best eight power play goals and notched three game-winners for the Rush.  It was a triumphant return after playing a very limited schedule in Sweden during 2020/21.

It was not a spectacular year for the Wings, who finished 36-35-1, but Gorsuch was a workhorse.  His 50 appearances were second-most in the ECHL.  Gorsuch was 23-24-0 with one shutout.

Ending the year with the Fuel, Lemos eclipsed his production with the Mavericks.  Over 44 appearances with Kansas City, he had 22 points.  Lemos notched 25 in 25 games for Indy.

If there was any rust, MacArthur shook it off quickly.  Coming out of retirement at midseason, MacArthur had eight goals and 23 assists in 38 games at age 37.

Where Are They Now Features are presented by Karen’s Print Rite.  Photo of Blake Winiecki courtesy of the Florida Everblades. 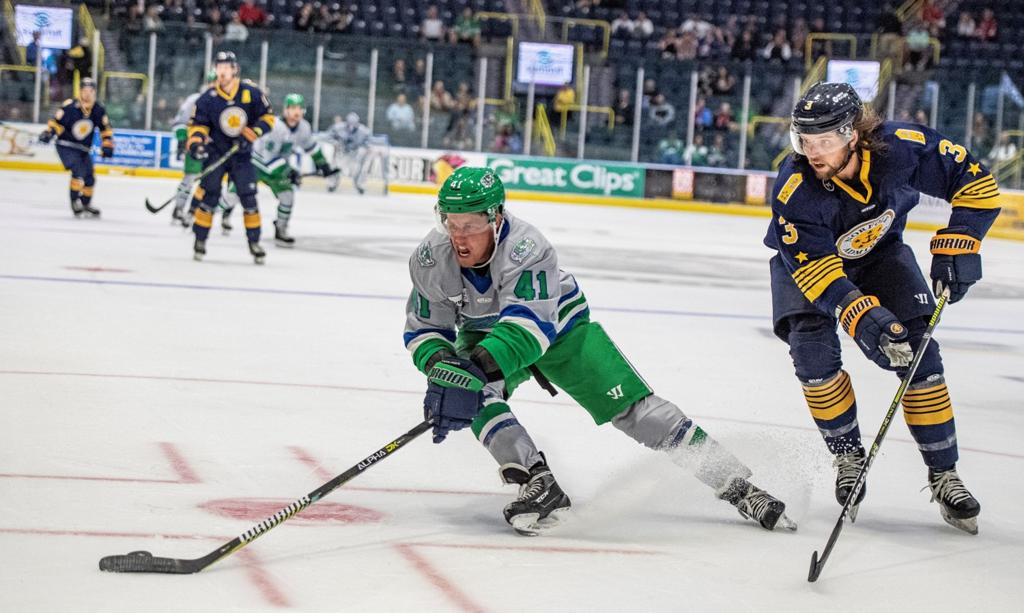