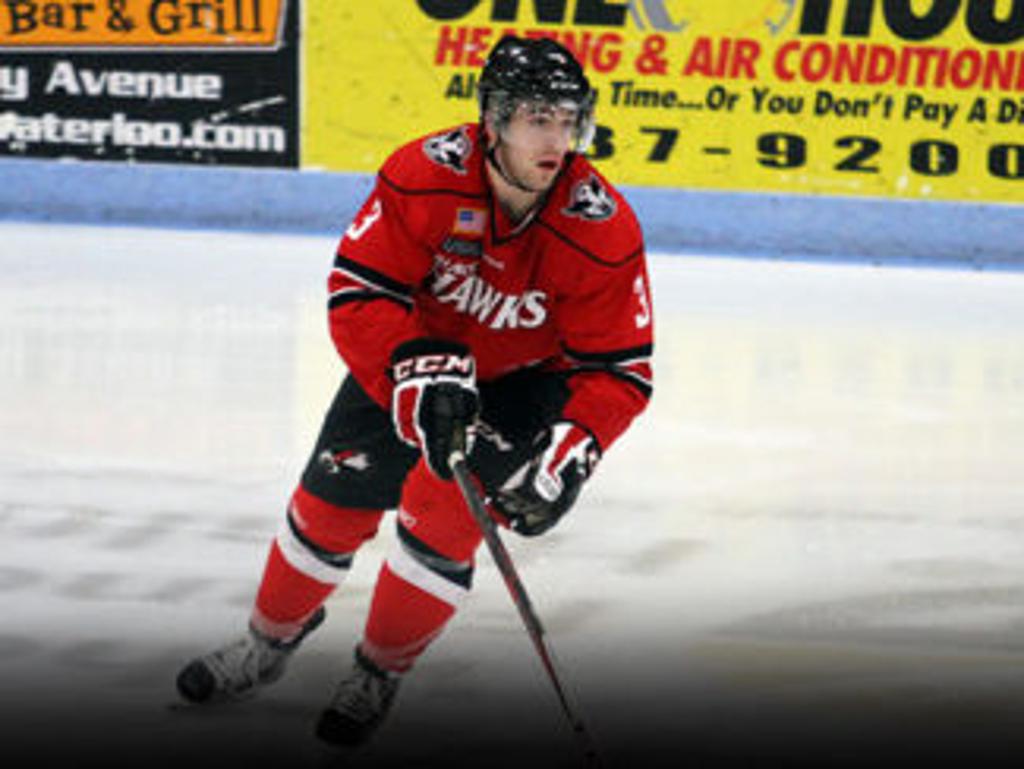 Nearing the end of his first professional hockey season, former Waterloo Black Hawks defenseman Ian McCoshen is anticipated to make his first National Hockey League appearance this evening as a member of the Florida Panthers.

McCoshen has spent the 2016/17 campaign with Florida’s American Hockey League affiliate, the Springfield Thunderbirds.  There, the 21-year-old had four goals and a dozen assists in 65 games.  He also has earned a team-best +18 plus/minus differential.  For good measure, McCoshen was recently honored as the Thunderbirds’ Man of the Year for his service to the Springfield community.

The Panthers drafted McCoshen in the second round with the 31st overall pick following his third and final season with the Black Hawks in 2013.  Starting in Waterloo at just age 15, McCoshen was in the lineup for 150 USHL regular season games and 22 playoff contests.  With a powerful slapshot, the 6-foot-3-inch blue-liner developed into a scoring threat by his third USHL campaign, recording 11 goals and 33 assists that winter to finish second in 2012/13 league scoring by defensemen.

McCoshen helped Waterloo achieve several notable distinctions from 2010/11 through 2012/13.  During his second season, the Black Hawks reached the Clark Cup Championship Series against the Green Bay Gamblers.  Just three months later, the team was representing the United States during the 2012 Junior Club World Cup in Omsk, Russia, and returned from the expedition with a silver medal.  In his final USHL campaign, McCoshen was a leader on a Hawks squad which set a club record with 273 goals and matched the then-club record win total of 39 victories.

Upon completing his time in junior hockey, McCoshen enrolled at Boston College and helped the Eagles to three NCAA Tournaments and two Frozen Fours.  His college marks included 110 appearances, 17 goals, and 33 assists.  While in Boston, McCoshen also represented the United States twice during the IIHF World Junior Championships.  He left college to sign a Panthers contract last June.

McCoshen’s first appearance with the Panthers will give Waterloo a team record eight alumni who have appeared in the NHL this season.  McCoshen will be the fourth member of that group to make his league debut in 2016/17, joining Zach Sanford (Washington Capitals/St. Louis Blues), Brandon Montour (Anaheim Ducks), and Brock Boeser (Vancouver Canucks).  The other Hawks alumni in the NHL this year are Joe Pavelski (San Jose Sharks), Craig Smith (Nashville Predators), J.T. Brown (Tampa Bay Lightning), and Vince Hinostroza (Chicago Blackhawks).

Although McCoshen is one of four Black Hawks to be drafted by Florida, he will be the first to play a game in a Panthers sweater.  Tonight’s Panthers home game is against the St. Louis Blues.

Tag(s): Where Are They Now?