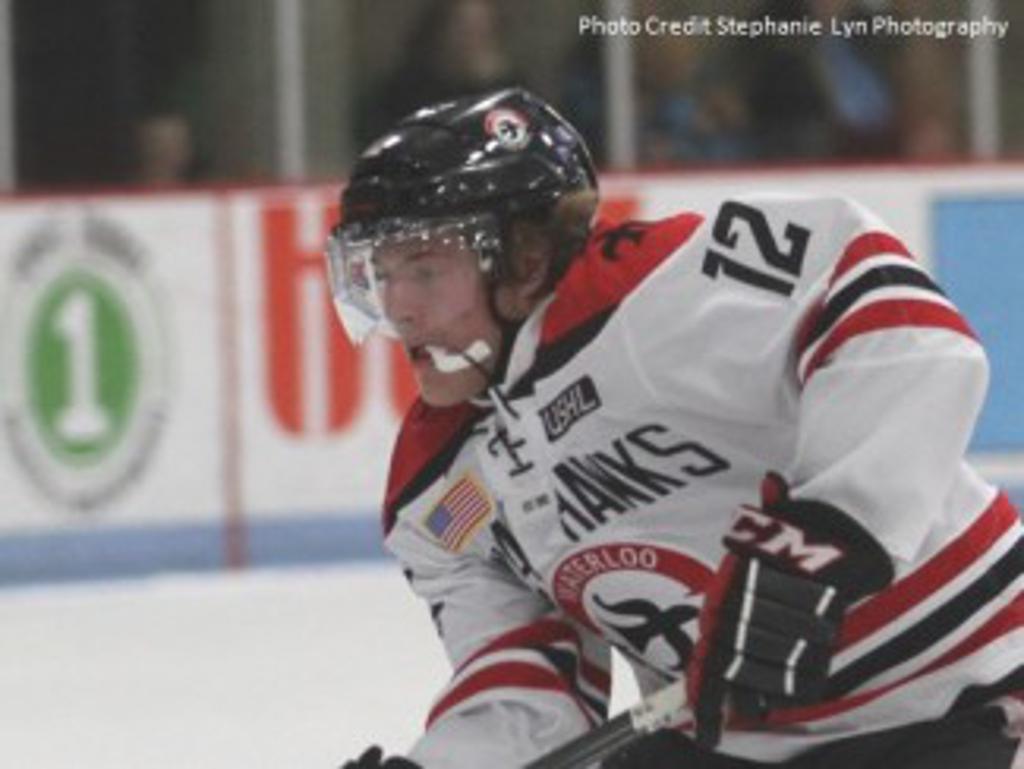 In less than two years since his final game with the Waterloo Black Hawks, Brock Boeser has been drafted by the Vancouver Canucks, won a National Championship at the University of North Dakota, and today could make his first National Hockey League appearance.

Boeser completed his NCAA career Friday, wrapping up his sophomore season in the Fighting Hawks’ double-overtime NCAA tournament loss to Boston University in Fargo.  He signed with the Canucks this morning and is expected appear in Vancouver’s game this afternoon against the Minnesota Wild in St. Paul.

During the 2014/15 season with the Waterloo Black Hawks, Boeser had a superlative campaign.  He led the Black Hawks with 68 points in 57 appearances, capping the year with 18 points in the final dozen games.  Considering Boeser’s co-league leading total of 35 goals, he was recognized with a place on the 2014/15 All-USHL First Team amid acclaim leading toward the 2015 NHL Draft.

In June of 2015, Boeser became the earliest Black Hawk ever chosen by an NHL club.  Vancouver used the 23rd overall pick to claim the Burnsville, Minnesota, native.  Peter Ferraro (1992, New York Rangers) is the only other Black Hawk to be selected with a first round pick.

As a freshman for the Fighting Hawks last winter, Boeser led North Dakota with 60 points (27 goals, 33 assists) in 42 appearances.  He also skated for the United States during the 2016 IIHF World Junior Championships, winning a bronze medal, before North Dakota claimed the National Title against Quinnipiac.  In the NCAA championship game, Boeser recorded the game-winning goal, plus three assists.

Sidelined for eight games this season, Boeser was still the Fighting Hawks’ third-leading scorer in 2016/17.  He recorded 16 goals and 18 assists for 34 points in 32 appearances.  Boeser also served as North Dakota’s assistant captain.

Boeser is the second former Black Hawk to sign an NHL contract this week.  Defenseman Mark Friedman inked a deal with the Philadelphia Flyers on Tuesday.

When he takes the ice for his first shift with Vancouver, Boeser will become the seventh former Black Hawk to skate in an NHL game this season.  The group includes Zach Sanford (Washington Capitals/St. Louis Blues) and Brandon Montour (Anaheim Ducks) who each made their league debuts this winter.  The others are Joe Pavelski (San Jose Sharks), Craig Smith (Nashville Predators), J.T. Brown (Tampa Bay Lightning), and Vince Hinostroza (Chicago Blackhawks).

Former Waterloo defenseman Andrew Alberts is the only Black Hawk alumnus to have played in the NHL for the Canucks.

Tag(s): Where Are They Now?