A new Downtown Attractions Shuttle bus will be available to bring fans to the rink from remote parking locations during Waterloo Black Hawks home games, the team announced on Wednesday.

The new convenience is a joint effort between the team, Young Arena, the Metropolitan Transit Authority, and the City of Waterloo. On game days the complimentary shuttle will be available one hour prior to puck drop, running continuously for four hours.  For a 7:05 p.m. game, that means the bus will operate from approximately 6-10 p.m.  There is no fee for fans who choose to take advantage of the service. The accessible bus includes a ramp for passengers using a wheelchair or other mobility devices, along with specific locations for securement, and other features to ease travel for passengers with disabilities.

“I would like to recognize everyone who made this possible at Leisure Services, the City, MET, and Tech Works; as improvements continue in downtown Waterloo, we want to continue to make it as easy as possible for fans to cheer on the Hawks here at the rink,” said Waterloo Black Hawks Vice President of Sales and Marketing Joe Greene.  “We will be continuously evaluating this service to make sure fans get the most from it and as needed, we’ll look into expanding to other parking areas.”

Initially, the shuttle to Young Arena will transport fans from the parking lot on the main TechWorks Campus located at 300 Westfield Ave in Waterloo. The shuttle will return Black Hawks fans to the Tech 1 parking lot after the game. Fans can track the real time location of the bus at https://transit.unitegps.com/mt.

For Saturday’s home opener, shuttle service will start early due to the previously scheduled Season Ticket Holder Tailgate Party. Fans may access the shuttle starting at the special time of 4:00 pm at the TechWorks Campus. In case of inclement weather, the tailgate event will be moved inside Young Arena where complimentary Texas Roadhouse will be served to season ticket holders starting at 4:30 pm (while supplies last).

The Black Hawks encourage all attendees to use caution while driving to attend games at Young Arena this season as road construction around the facility continues to evolve.  Beginning this week, Commercial Street is open in front of the arena all the way to the Highway 218 interchange.  Southbound Highway 63 – currently detoured onto 1st Street – is forced to turn right onto Commercial.  Northbound Highway 63 is now one-way between Jefferson Street and Commercial (previously two ways).  Jefferson is closed between 1st and Westfield.

From the south on Highway 218, consider keeping right on Washington Street just before the road becomes an elevated highway or take Exit 181B to access West Commercial Street.

Especially for those arriving near puck drop, using these alternatives makes it likely to find lots with parking spaces within five blocks of Young Arena at a time when closer parking areas may already be full.  The municipal parking ramp five blocks from the rink on Commercial Street (between 4th and 5th Streets) may offer another good alternative, although this option includes a small fee.

For tickets to the Hawks’ home opener Saturday against the Dubuque Fighting Saints, or any other regular season home game, call the Domino’s Black Hawks Box Office at (319) 291-7680 or visit waterlooblackhawks.com. 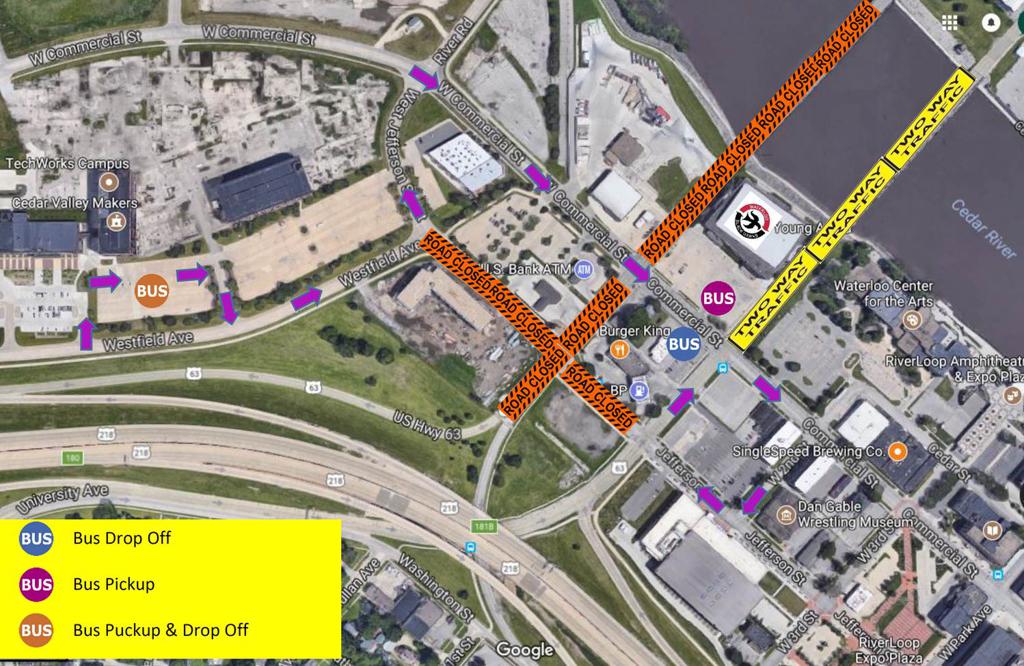