The next phase of construction on U.S. Highway 63 in downtown Waterloo has begun.  Road crews started detouring traffic in the area near Young Arena, and on other parts of the route through the city, earlier this week.

The improvement project includes 1st Street (northbound Highway 63) beginning at Jefferson Street and has closed the 1st Street bridge over the Cedar River.  Mullan Avenue (southbound Highway 63) is typically one-way, but there is a traffic pattern change.  The road is currently operating one-way in each direction with a center turn lane.

Those coming into Waterloo from the north on Highway 63 will be most dramatically impacted.  North of Franklin Street, the route is completely closed moving both directions.  The detour for inbound motorists begins at Airline Highway, proceeding west to Waterloo Regional Airport, where traffic is directed onto U.S. Highway 218.

Especially for those arriving near puck drop, using this alternative makes it likely to find lots with parking spaces within five blocks of Young Arena at a time when closer parking areas may already be full.

This new convenience first became available earlier this season and is a joint effort between the team, Young Arena, the Metropolitan Transit Authority, and the City of Waterloo. On game days the complimentary shuttle is available one hour prior to puck drop, running continuously for four hours.  For a 7:05 p.m. game, that means the bus will operate from approximately 6-10 p.m.

Due to the closure of Commercial Street at 1st, the Party Town Shuttle has been re-routed to drop off passengers bound for the arena near the corner of Mullan and West Commercial (near U.S. Bank).  Please see the map below for more details.

There is no fee for fans who choose to take advantage of the service. The accessible bus includes a ramp for passengers using a wheelchair or other mobility devices, along with specific locations for securement, and other features to ease travel for passengers with disabilities.

Initially, the shuttle to Young Arena will transport fans from the parking lot on the main TechWorks Campus located at 300 Westfield Ave in Waterloo. The shuttle will return Black Hawks fans to the Tech 1 parking lot after the game. Fans can track the real time location of the bus at https://transit.unitegps.com/mt. 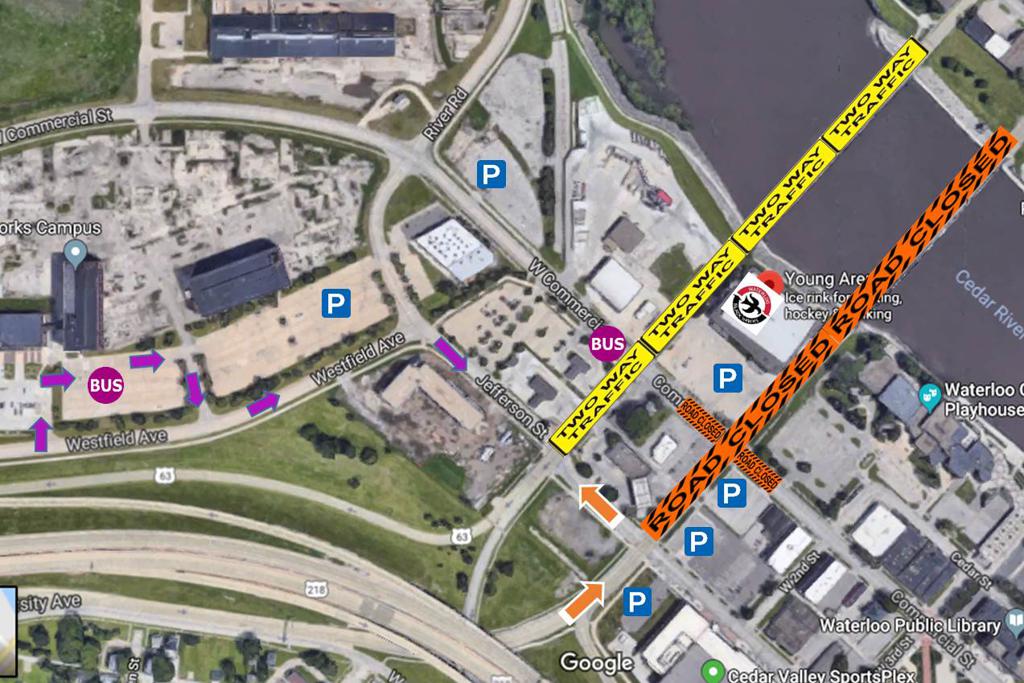